﻿ Aldesa
Nor Grupo Bursátil Aldesa, based in Costa Rica, nor Almacenes de Desarrollo, S. A. (ALDESA) have nothing to do with Grupo Aldesa.
Youtube Flickr Linkedin

Our thanks for supporting the #SolidaritytoUkraine campaign, promoted by Aldesa

Aldesa, joining the current solidarity to help those affected by the war in Ukraine, has promoted since last March the campaign #SolidaritytoUkraine. Thanks to the donations received, some thirty boxes filled with essential goods and several thousand euros have already been sent to Ukrainian refugees in Poland, where the company has been present since 2007, as well as to those affected in the conflict zone itself.

The collaboration of several volunteers has made it possible to gather, classify and send the donations collected at the Madrid and Warsaw headquarters, among other work centers, and which mainly included canned food, children's products and medicines. As for the economic contributions, they were channeled through direct donations to UNHCR and Siepomaga, two social entities that have been providing aid on the ground since the beginning of the conflict.

Aldesa would like to publicly thank its team and all those who joined this solidarity initiative for the extraordinary collaboration received in this situation of extreme need. 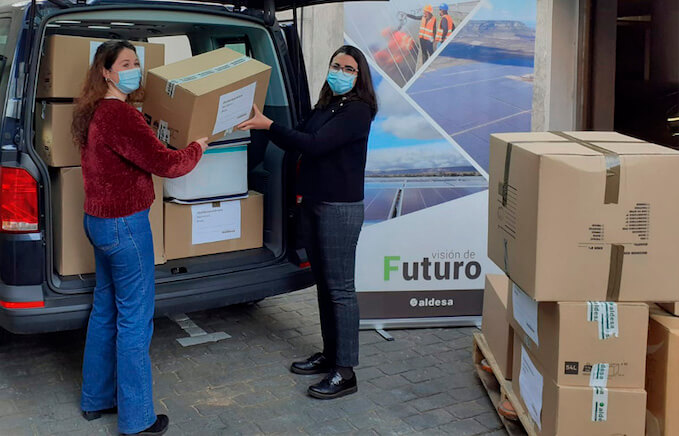 Collection of donations received at Aldesa's headquarters in Madrid.

Data protection
The personal data you provide will be included in a file that is the responsibility of Grupo Aldesa, registered address at Bahía de Pollensa, 13- 28042 Madrid, in order to manage your notification, conduct the investigation of the facts reported, adopt the pertinent corrective measures, and if necessary, inform you about the result of the procedure.
Your data will be treated confidentially and will not be communicated to any third party, unless they are essential for the investigation of the facts reported.
In any case, in compliance with the legislation on data protection, you can exercise your rights through the email address: arcopol@aldesa.es providing a copy of your ID or equivalent document, and identifying yourself as a user of the Internal Reporting service.